Note: This section is UNDER CONSTRUCTION!

The MicroVolts clan system was originally released during the official release of MicroVolts on June 9th, 2011. 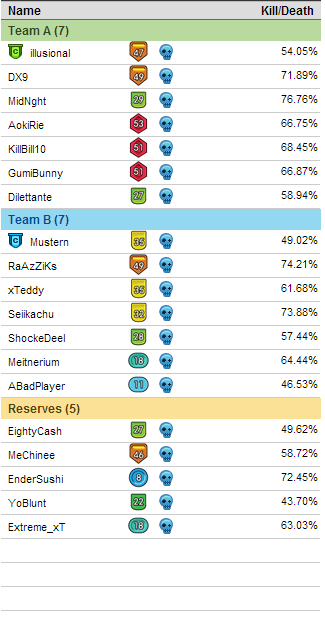 A clan consists of 1 - 30 members and are divided into 3 groups, Team A, Team B and Reserves.

Each team can have one captain and a clan leader for the entire clan.

To this day there is no current purpose or difference between any of the teams, even so the majority of players still hold the feeling that a member on Team A or B is more important than a member in the reserves.

Members can be viewed on the MicroVolts homepage, the clan page shows each player, the group they are in as well as their level and Kill/Death percentage.

Clan Matches are played with 4 - 8 members and are played in the following modes:

The clan rankings are based off of "Clan Points" which are gained from playing clan matches, points can be gained from wins or loses,         however wins give more points which will increase your rank. Only the Top 100 clans are showed on the main clan page, however you can search or clan or any other clan in the search bar to view it.

You can view your rank on your clan page right below your clan description. You can also view your clan's creation date and Win/Lose ratio also!
.
.
.
.
.
.

M
Retrieved from "https://mvs.fandom.com/wiki/Category:Clans?oldid=6222"
Community content is available under CC-BY-SA unless otherwise noted.